Big Ship to Sail Past Heights This Afternoon 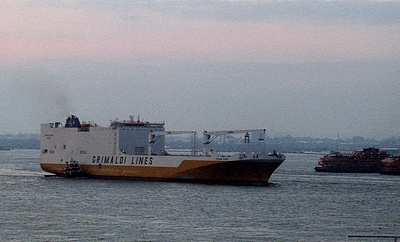 The giant (703 feet long, 56,650 gross tons) combination container and RORO ship Grande Benin, belonging to Italy’s Grimaldi Group (no relation to the pizza folks, so far as we know) will depart from the Brooklyn Navy Yard, where she has been undergoing repairs for the past several weeks, at 1:00 p.m. She should be passing under the Brooklyn Bridge and heading past Pier 1 of Brooklyn Bridge Park and the Promenade shortly after that. 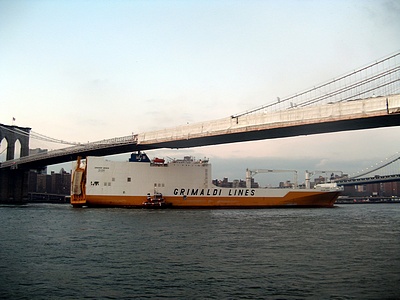 Grande Benin is so tall that, to fit under the Brooklyn Bridge, she had to be ballasted down and have her mast removed. Thanks to PortSide New York for the tip.

Photos by C. Scales for BHB.