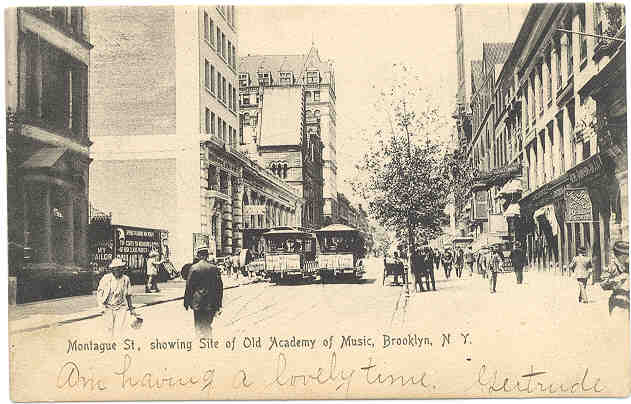 There were a few accidents on the line including one on February 9, 1892. Three people were injured. The Brooklyn Eagle reported:

An accident that occasioned a great deal of excitement and injured three persons occurred this morning on the Montague street cable road. Car No. 6 was rolling down toward the Wall street ferry house at 9:30 o’clock in charge of B. Jay Raymond, conductor, and Thomas Halliday brakeman, when just at the turn of the hill approaching Montague terrace the brake chain slipped and the vehiclestarted on a bound and jump for the ferry house. Brakeman Halliday blames an obstinate coach driver for the trouble. He says that for several days he has been annoyed by a private coachman who persistently drove down ahead of his car in the morning and doggedly kept in the tracks, thereby obstructing the road. The wicked coachman was at his old tricks this morning.

Something unexplained happened at 8:15 o’clock this morning to car No. 5 of the cable line, which runs down Montague street from the city hall to the ferry. The car had just started on its way down the hill toward the hill when it stopped suddenly with a jar which threw all the passengers about like corn in a popper. Herman Beck, aged 15 years, of 188 Van Buren street was standing looking through the glass of the front door at the moment of the accident. He was thrown through the window but escaped with a cut chin.

More info on the Brooklyn Heights Railroad at Cable-Car Guy.