It’s strange to think of a company founded in the year 2000 as a member of an “old guard,” but by DUMBO (aka the New York Digital District) standards, that’s exactly what Big Spaceship, a digital creative agency, is.

“It was all unfinished, raw space,” Joshua Hirsch, Big Spaceship’s Minister of Technology, said of their first home at 70 Washington Street, where a decrepit bathroom down the hall once showed up on a website they were creating for the horror movie “Identity.”

From 70 Washington, Big Spaceship didn’t move far to its current home at 45 Main Street, where their door is always open to anyone looking for advice. “We tell people how we do things, which we think is maybe a little different from the way a lot of people do things,” Hirsch, 36, a self-described video game junkie who joined Big Spaceship in 2002, said. “It may or may not be the right way, but it works for us.”

With 11 successful years behind them, including their best year ever in 2010, Big Spaceship’s willingness to divulge its secrets doesn’t seem to be a problem. Started by Michael Lebowitz, Big Spaceship made its mark creating websites for movie studios, a “good place to get known,” according to Hirsch, because people in the film industry like to talk.

“We were doing something a lot of companies like ours weren’t, which was working directly with a client rather than with an ad agency in between, and doing all the work from concepts all the way through design, development, build, and deployment,” Hirsch said, sitting in his artfully decorated office that contains remnants, like a hulking bass guitar in one corner, of his former life as a musician in Chicago.
Quarterbacking every step of the creative process from inception to implementation, and receiving feedback directly from clients along the way, has allowed Big Spaceship to catch problems or inconsistencies before they spin out of control.

“We don’t have anybody with ‘creative’ in their title,” he explained. “Everybody’s creative, and everybody contributes to the creative process. And if you’re not creative, you won’t work here.”

That includes programmers, normally not considered the most artistic employees at a digital media agency. “Writing code and thinking about the technology of a project, and how something’s going to work and how something’s going to behave, is just as creative as coming up with an idea or creating a visual,” said Hirsch, who, as the leader of the technology team, quickly leapt to his cohort’s defense.

Throughout a campaign’s evolution, Big Spaceship ensures all disciplines are represented, which Hirsch said “is very different from how a lot of agencies work,” especially traditional agencies, where a Don Draper-like “creative director” tends to “own” an idea. In Hirsch’s view, that’s a dangerous approach.

“If a developer gets something he’s never seen before, and is told to make it work in a certain way—why should they care?” he said. “Whereas if the developer’s been there since the beginning, and contributed to the idea, and understands the growth of it, and sees themselves in it, they’ll take a lot of pride and ownership in it.” 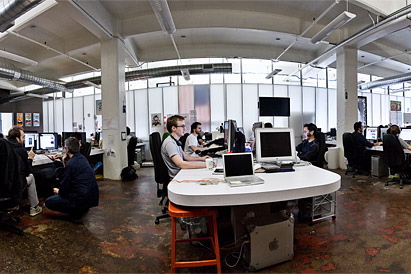 For proof of this method’s merit, ask companies like Coca-Cola, General Electric, Microsoft, HBO, Target, and Victoria’s Secret, which have all enlisted Big Spaceship’s work. Recently, Big Spaceship was hired to shake up the online presence of Skittles, a brand so ubiquitous that it seems like it would exist no matter what, kind of like air. Hirsch and his colleagues overhauled the Skittles website from just basic nutritional information to a full-on interactive experience with kitschy videos, and developed a more vibrant Facebook presence by giving the Skittles “rainbow” a personality. In just ten months, Skittles went from having a very respectable 3 million Facebook fans to almost 15 million at present.

Despite its stature, and that of many of its clients, Big Spaceship employs just around 50 people, a number Hirsch thinks is perfect for maintaining a particular culture.

“We really want to have a place where people want to come to work everyday, especially in a creative environment,” he said, gesturing out toward the white-walled, airy open space where the majority of employees sit around oval tables, staring at computers. “You want people to be happy so they can create. Ping-pong tables, and foosball, and video games are cliché, but really, those things do add value.”

The ambitious yet friendly dynamic at agencies like Big Spaceship has spilled over into the larger industry, as the neighborhood’s Digital Dumbo meet-ups attest. But as Hirsch noted, “Being in a creative industry comes with a lot of ego.” Big Spaceship prides itself on a lack thereof, but with a Creative Arts Emmy Award nomination for its work for HBO under its belt, it’s difficult to think of this thriving digital agency as being on the same level as its start-up neighbors.

“At the end of the day, we’re making freaking websites and apps and stuff, which is fun and great and I love being a part of it, but this whole ongoing conversation about transitional agencies versus digital agencies, and getting in fights—all this crap is hysterical to me,” Hirsch said sheepishly, as he fiddled with the string of his hoodie sweater, a wardrobe essential in the region. But Hirsch’s was no run-of-the-mill hoodie; a sign, perhaps, of Big Spaceship’s role, and its success.

“My hoodie is cashmere,” Hirsch admitted, smiling. “From Barney’s.”