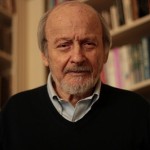 E.L. Doctorow, one of the most accalimed writers of contemporary American fiction, whose novels include Ragtime (1976 National Book Critics Circle Award; a 1981 movie version starred James Cagney as a police commissioner and Norman Mailer as the architect Stanford White), World’s Fair (1986 National Book Award), and, most recently, Homer & Langley (2009), a fictional account of the lives of the famous hoarders, the Collyer brothers, will speak in the Founders’ Hall of St. Francis College, 180 Remsen Street (between Clinton and Court) at 11:00 a.m. on Thursday, February 3. The event is free and open to the public.

Mr. Doctorow will discuss his writing process and his incorporation of history, particularly the history of New York City, into his writing. This event is part of the Volpe Lecture Series, sponsored by the College’s Chairman Emeritus Thomas J. Volpe, who said, “Mr. Doctorow’s novels offer an enlightening look at various aspects of New York and America’s history. St. Francis College students and the larger community will have a fantastic opportunity to hear straight from the author about his inspirations, research and the themes he addresses in his work.”