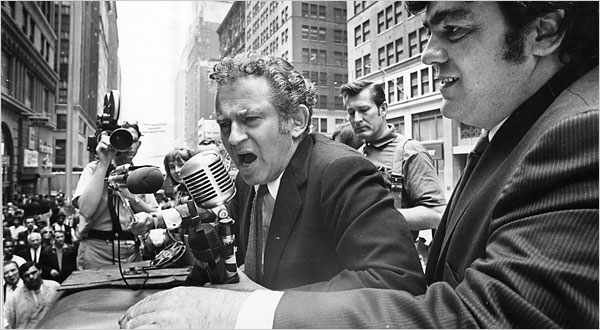 New York Times: Norman Mailer, the combative, controversial and often outspoken novelist who loomed over American letters longer and larger than any writer of his generation, died today at Mt. Sinai Hospital in New York. He was 84. The cause was renal failure , said J. Michael Lennon, his literary executor. Mr. Mailer burst on the scene in 1948 with “The Naked and the Dead,” a partly autobiographical novel about World War II, and for the next six decades he was rarely far from the center stage. He published more than 30 books, including novels, biographies and works of nonfiction, and twice won the Pulitzer Prize: for “The Armies of the Night” (1968), which also won the National Book Award, and “The Executioner’s Song” (1979).

USA Today: His Brooklyn Heights town house offered a dazzling view of the Manhattan skyline. He preferred the view in 1961, when he moved in, when the spires of skyscrapers reminded him of the "needles of the Alps." Those buildings are now dwarfed by new, boxy structures he dismissed as "huge Kleenex boxes" standing on end.

Staring across the East River, in an 1997 interview with USA TODAY, he said, "Once there were robber barons over there. Now they're just corporate suits. On balance, I'd prefer the robber barons. At least they were interesting."

Mailer was short and handsomely craggy, with a bulldog chest. His curly hair had gone snow white. He ended up relying on a hearing aid and two canes, and lamented, "If I walk 200 yards a day, I feel heroic."

While he spent most of his final years in Provincetown, Norman Mailer made Brooklyn Heights his home for the better part of his life. We've heard stories of Mailer sightings in the neighborhood, including Mrs. Fink's own encounter with the cantankerous author at Tenda earlier this year. Anyone else have Mailer stories?