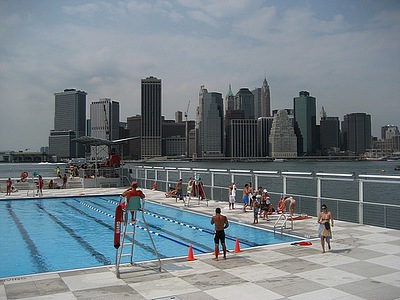 The Broooklyn Bridge Park Corporation has applied for a permit to build a floating pool, similar to the Floating Pool Lady (see photo above) that was docked below the Heights in the summer of 2007.

Park officials want to build a new floating pool, like the wildly popular barge-borne one that docked in the Brooklyn Heights harbor four summers ago, and last week took the first step by applying for a permit with the state Department of Environmental Conservation.

The pool would be located on the north side of Pier 5, between the foot of Joralemon Street and Atlantic Avenue. Assuming the permit application is successful, the Park would still need to raise $5 to $10 million in funds to construct the pool.

Once again, alternate side rules suspended
Willowtown Association Weighs in on Park Financing