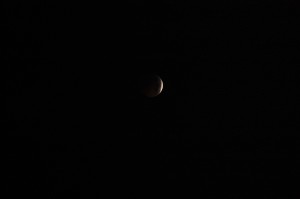 When I heard there would be a lunar eclipse on the winter solstice for the first time in 456 years, and that the skies over New York City would be crystal clear that night, I promptly talked my husband into joining me on the roof of our Pierrepont Street low-rise building at 2:41 a.m. to behold this uncommon sight.

We set the alarm, settled in for a few hours of slumber, and then dragged ourselves out of bed in the pitch black of 2:35 a.m. Jackets and hats and gloves assembled, camera and lenses in hand, we walked up the six flights of stairs to our roof deck, because the doorman in our pre-war building, who is also the elevator operator, was likely collecting the garbage and had not responded to our call to ascend.

Once we reached the top level, we unlocked the deadbolt, opened the door, walked onto the roof and into the whipping winds, looked up, and saw a nearly entirely red moon staring back. It was as cool as promised, with just a sliver of white still visible, but quickly disappearing. I snapped a few photos and we marveled, shivering, for a few minutes, before deciding it was time to return to our cozy bed.

I pulled on the door to go back into the hallway, but it didn’t open. Assuming my gloves were to blame, I beckoned my husband to give it a go. Same outcome. The door was stuck, or locked, somehow, and we were trapped.

My initial instinct was to not freak out, but that proved impossible. Immediately, I started banging on the door, frantically screaming, “Hello!” as loud as I could. No reply. Best we could figure, the doorman came up to the roof level to collect the penthouse apartment’s trash, saw the deadbolt open, and closed it, assuming nobody was out on the roof at 2:45 a.m. on the first official day of winter. I can’t really blame him.

But my sympathy for the doorman didn’t change that we were stuck on a very cold roof in the dead of night. It was the kind of pickle made for cell phones. Ours were nice and warm in our apartment.

As I continued banging on the door, my husband shushed me to be quiet, lest we wake up any of our neighbors. Wasn’t that the point? Undeterred by his admonishment, I noticed that the gate dividing the public section of our building’s roof from the part reserved for the penthouse was closed with just a thin piece of wire. I quickly untwisted it, pushed through the gates, and began banging on the windows of the penthouse, very much aware that I could be mistaken for an intruder and shot dead on the spot. It was a chance I had to take.

I banged, I yelled, I banged some more. No movement inside the apartment, though a light on in the foyer provided some hope that its tenants were inside, and not on vacation somewhere decidedly warmer than a tenth floor roof deck in Brooklyn.

I ran back over to my husband, who was as freaked out as I was but not acting on his anxiety. “How did this happen?” was all we kept saying to each other, through chattering teeth, as we paced the roof for what seemed like an eternity, but was probably just four or five minutes in reality.

“I see someone coming!” my husband suddenly said, as if in a trance. Seconds later the door to the roof swung open, and the nice man who lives in the penthouse appeared in a plaid robe. His eyes heavy with sleep, he said, “So, how was the eclipse?”