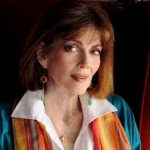 Norris Church Mailer, Brooklyn Heights resident and widow of Norman Mailer, who died three years ago, died today at her home. The cause was cancer.

The New York Times: Norris Church Mailer, a woman bred in the rural poverty of Arkansas who married Norman Mailer and managed his career and family life over three decades while carving out her own niche as a writer, died on Sunday at her home in Brooklyn Heights. She was 61.

She met Mailer when he came to her hometown of Russellville, Arkansas for a book signing, and later became a writer in her own right, publishing a memoir, A Ticket to the Circus, early this year. She was also the author of two novels, Cheap Diamonds and Windchill Summer. She is survived by her son by her marriage to Mailer, John Buffalo Mailer, a son, Matthew Norris, by her previous marriage (thanks to reader Lois for the update), and several stepchildren by Mr. Mailer’s previous marriages.