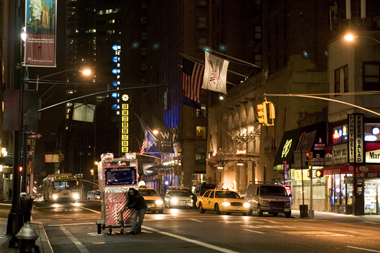 Man Push Cart (trailer), the writer/director Ramin Bahrani's critically acclaimed story of "the Bono of Pakistan" who comes to America and becomes a sidewalk vendor, opens today at the Brooklyn Heights Cinema I & II.  Ahmad Razvi, a New Yorker of Pakistani descent, stars as Ahmad.

"A lot of these taxi drivers or these people doing odd jobs, they come from another world where they're doctors, they're professors, they're engineers, where over here it's not accredited, it's not recognized," said Razvi, 33, who came to the U.S. as a six-year-old. "This guy had everything in his life. He was rich and famous. He was a rock 'n roll star. But he chose to leave all that because he was in love."

Even at 87 minutes, Man Push Cart feels slow, but it's a good kind of slow. The pace is deliberate enough that details like a sticker on the side of the coffee cart are allowed to blossom into significance. Ahmad Razvi is superb as the troubled hero—he conveys more in 10 seconds of stillness than many actors do in entire careers. The movie isn't perfect; at least one subplot, involving Ahmad's former wife, is left so ambiguous that it amounts to a tease on the filmmaker's part. But if one of the things movies are supposed to do is make you look anew at the world around you, you may never see your doughnut vendor in the same way again.

This film is not rated.