Out of Context, Fugly or Brilliant? Some of Brooklyn Heights’ Most Controversial Buildings

By Homer Fink on November 15, 2010 2:34 am in Architecture, Brooklyn Heights, Landmark Preservation

With preservationist tongues wagging in anticipation of the proposed “modern” structure at 27 Cranberry Street, we thought it would be interesting to open up the discussion regarding some of the neighborhood’s other “controversial” structures.

To get the discussion started, here’s a list of some  so-called “out of context”  buildings in Brooklyn Heights:

We’ve just scratched the surface, so please add your suggestions in the comments below.

28 Middagh Street – Despite the fact that it has an award winning interior restoration, this 1829 home draws the ire of the current AIA guide which says that its facade has been “mutilated beyond recognition.”

As for how it got that way,  Brown Harris Stevens broker Gabriel Ford told the Brooklyn Eagle, “Sometime after 1940, someone removed the front stairway, added asbestos shingles, created a side entry and added a two-car garage…In their mind they probably thought they were modernizing it, but it looked horrible.”  Cranky preservationists aside, the one car garage here makes it a sweet deal for some.

222 Columbia Heights – The demolition of the Cornell Mansion (built in 1865) in the mid 1950s was one of the motivating events in the Brooklyn Heights historic preservation movement.  In 1982 a new structure took its place.

123 Joralemon Street –  In 1993, architect Joseph Stella was commissioned by its owner, Malcolm Fein, to do minor renovations to the structure, a modest suburbanesque home. He proposed a larger project utilizing the maximum amount of space allowed by law on that lot. The result of his vision is the modern carriage house featured on the 2008 BHA House Tour. However, not everyone in Brooklyn Heights seemed to be tickled by this new addition.

Stella quotes Heights Landmark District pioneer Otis Pearsall as saying, “These 1990′s experiments in ersatz history by Joseph Stella…use a variety of historical references largely foreign to indigenous Heights architecture, to produce what strikes me as a Disney-like mockery of historic preservation.”

The Brooklyn Eagle’s Henrik Krogius is also not a fan saying it  “lacks any depth in architectural detail; it is flat as a stage backdrop… [the] “1950′s one-story ranch-house building that [that 125 replaced] though certainly a curiosity in the Heights, ought to have been preserved as part of the Historic District”.

The Margaret Apartments –  The original 1889 Hotel Margaret designed by starchitect Frank Freeman burned to the ground during the last stages of developer Bruce Eicher’s renovation in 1980.  After grappling with the Landmarks Preservation Commission,  Eicher sold the lot to the Watchtower who successfully argued for the right to build a new structure at the same height as the original.  What stands today is nothing close to Freeman’s brick, terra cotta and pressed metal masterpiece. [Above Flickr photo by Wallyg] 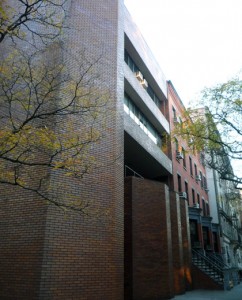 Jehovah’s Witnesses Dormitory and Library Facility – 119 Columbia Heights, built in 1970, is one of the earliest designs in the area post landmarking.   The main portion of the building screams 1970s “futurama” while the attached row house facades keep it from stinking up the vibe rest of the block.  And in 100 years, preservationists may be kvelling the work here by Ulrich Franzen as much as they do over an 1800s brownstone. 322 Hicks Street Apartments – Eye of the beholder indeed.  This structure, approved by the LPC in 2002 is, in the words of the 2010 AIA Guide to NYC a “worthy attempt to break out (or rather stretch out) of the brownstone mold by inflecting the brick facade and emphasizing the horizontal.”

For those wondering how the LPC may feel about the “modern” proposal for 27 Cranberry consider this quote.  ‘Brooklyn Heights has a long tradition of new buildings being contemporary,”  Brian Hogg, director of preservation at the landmarks commission told the New York Times in 2002.  He added that the design was ”exciting in its underlying inspiration between old and new buildings.”

A couple of footnotes – The award winning rebirthing of 36 Grace Court by Tom van den Bout and Brenda Nelson created a new benchmark for righting the aesthetic crimes of past generations.  Time will tell if  the owners (or future owners) of properties such as  27 Cranberry, the Poplar Precinct, 100 Clark Street etc follow their example.

Sleepy’s Construction Moving Along
Where Luca Brasi Met the Fishes?