The New York Observer confirms today that the uber-trendy Shake Shack will be coming to the Fulton Mall.  Tabloid reports last week claimed it was a done deal, but Shack’s flack issued a non-denial denial.  Now that it’s reality, does this mean the rise of tony shops for the strip and the death of tube sock merchants?  Only time will tell.

Brooklyn Beep Markowitz and Shack owner Danny Meyer held a press conference to announce the deal this afternoon.  Photo and press release after the jump. 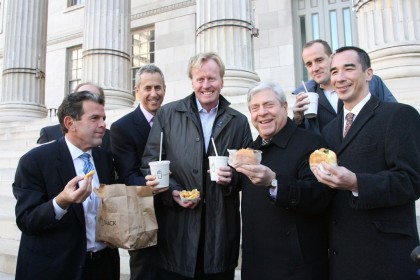 “Bravo to Shake Shack for finally hitting the big time in Brooklyn, further solidifying our status as one of America’s premier culinary destinations,” said BP Markowitz. “After years of pitching Danny Meyer, I am thrilled he is bringing his legendary burgers, flat-top dogs and frozen custard to Downtown Brooklyn, right in the heart of our new 24/7 live-work city center and its diverse retail, new hotels and expanding arts and cultural corridor. Soon, you will be able to walk the “beefed up” Fulton Mall and get a ShackBurger, do some shopping and finish off with a cheesecake from Junior’s—plus everything in between.”