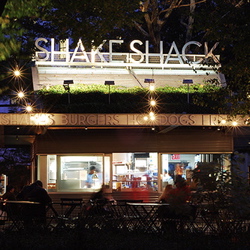 A BHB reader sent in a tip today that Shake Shack, the famed New York City purveyor of hamburgers and other tasty vittles, would soon arrive at the Fulton Mall. The NY Post wrote today that it’s a done deal and so did the Daily News. But before your mouth waters with thoughts frozen custard and salty french fries, we did a little investigating.

But alas, an e-mail from their spokesperson Theresa Mullen was decidedly ambiguous:

We feel extremely fortunate for the great interest in Shake Shack. As you may be aware, we have openly expressed our intention to bring Shake Shack to compelling sites in great neighborhoods. As such, rumors often circulate about potential openings. We have decided not to comment on any of these rumors until we have something concrete to share. At this time we are focusing our efforts on the operations of our existing Shacks, as well as three new Shacks slated to open in 2011: Washington, DC, Battery Park City and Westport, CT.

What do you think? Should Shake Shack make the trip over the bridge to Brooklyn?

LPC to Consider 27 Cranberry, 300 Henry in Brooklyn Heights, 55 Washington in DUMBO
The Recession Must Be Over – Gabriel Byrne’s Townhouse Goes for More than Asking