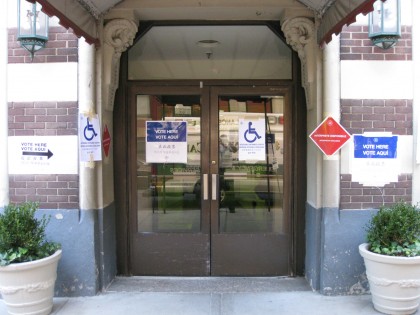 Voters visiting urban polling places, including here in Brooklyn Heights, are reporting heavy turnout by voters early in the day.

The Huffington Post: By 9:00 a.m., there were already 132 voters at a polling place in north Brooklyn near Borough Hall, which Politico’s Maggie Haberman calls “an impressively high number that early in the morning for a midterm race.” HuffPost reader Tim B. in Brooklyn Heights also reported that when he voted at 10:30 a.m., it was “more crowded than I have ever seen it. … It’s gonna be crazy tonight!”

HuffPo also reports some difficulties with the new voting system, as described by a reader from Williamsburg. Reports from Erie, Pennsylvania and Chicago also tell of higher than expected turnout. If this pattern holds nationwide, it could bode well for Democrats.