By Julie Kanfer on October 28, 2010 11:13 am in Arts and Entertainment, Brooklyn Heights, Celebrity Residents, Profiles 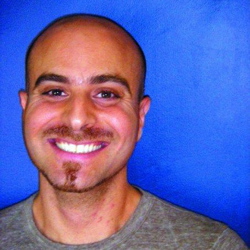 Brooklyn Heights resident David Adjmi was one of ten scribes, and the only playwright, awarded the 2010 Whiting Writers’ Award last night.  His initial reaction on the honor? “I was really gobsmacked when they told me,” Adjmi said, as only a writer can.

Unlike so many other distinctions for which writers vie, the Whiting Writers’ Award, which comes with a $50,000 prize, is decided by anonymous nomination. “It’s an absolutely extraordinary thing,” Adjmi, 37, said, and described his giddy behavior on hearing the news. “I couldn’t stop laughing…I must have sounded out of my mind.”

A graduate of Sarah Lawrence College, the University of Iowa, and Julliard’s prestigious Playwrights Program, Adjmi has completed six plays, most recently Stunning, which premiered at the Lincoln Center Theater last year. The three-act play examines the tightly-knit Syrian-Jewish community in Midwood, Brooklyn, where Adjmi grew up and found himself living after he “plowed through” some grant money in Germany.

“I didn’t know where to go, so I asked my mom if I could just stay there for a little bit, in the house I grew up in,” Adjmi said. He marveled at the “time capsule” in which Midwood seemed to exist. “Just thinking back to my life—it sparked something.”

As a kid, Adjmi, who is gay, felt “invisible” within the religious confines of his neighborhood’s culture, and now often writes about outsiders. “The play has charged elements to it,” he said of Stunning, which centers on the relationship between a Syrian-Jewish couple and their African-American housekeeper. “And I just didn’t write it with any sense of political responsibility, because I really was only writing it thinking it would never get done.” 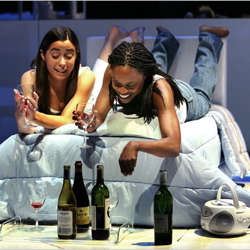 a scene from "Stunning"

Much of his work is autobiographical, but Adjmi acknowledged that many writers “like to invent things,” which he thinks is fantastic; it’s just not his M.O. “I’m working through things in all of my plays, and I can’t really write things unless I have a very, very deep, molecular connection to the material,” he said.

All artists, in his opinion, feel “minoritized at some point,” and their work becomes a means “to shunt all the things that you can’t say directly to somebody.” Marsha Norman, one of his instructors at Julliard, once told Adjmi, “In plays, we have all the conversations that we can’t have in life.”

Stunning could be considered Adjmi’s breakthrough work, if for no other reason than it garnered the most attention, but his favorite of his plays is called The Evildoers, which he wrote in Germany while battling a severe case of writer’s block.

“On the surface, it’s about two couples who are friends, and one marriage dissolves, and that incites the dissolution of the other marriage,” Adjmi said. He called another play of his, entitled Marie Antoinette, “a little gift from the universe” that centers on the tragic French Queen “trying so hard to live inside a comedy, in the middle of this bloodbath.”

Like other writers before him, Adjmi was drawn to Brooklyn Heights two years ago for its charm, and its other-worldliness. “It’s so blissfully quiet and beautiful here,” he said.

Adjmi frequents coffee shops like Tazza, Iris Café, and Crop to Cup, where these days he’s working on a memoir of sorts, and on two forthcoming plays. His one regional complaint mirrors that of other Heights dwellers, and it ain’t about the parking.

“I wish the food was better,” Adjmi said. “I want to write an open letter to Keith McNally, telling him to open a bistro on Montague.”

No doubt it would be a compelling read.