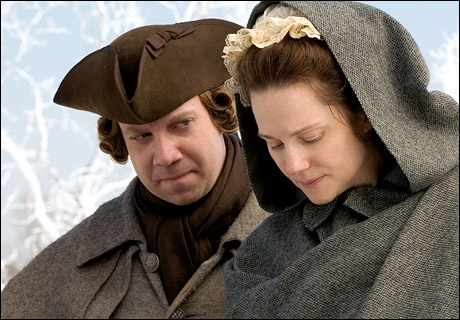 Globe and Mail: The Unknown…: HBO spent heavily to make the period drama as authentic as possible with sets and costumes. They wrote a script that stayed true to the thousands of letters that John and Abigail sent to one another. And, more important for both McCullough and Giamatti, they made the actors speak the way people would have in the 1700s.

"The language alone is fascinating. And it was something that I just couldn't believe someone was willing to put on television," says Giamatti, who lives with his wife and son in New York's Brooklyn Heights neighbourhood. "To have people speaking at this high level, with this amount of intelligence, was incredibly exciting to me. I kept praying after I took the job, 'God, I hope they don't chicken out and start rewriting it, and try to dumb it down.' They allowed these characters to be as intelligent as they actually were.