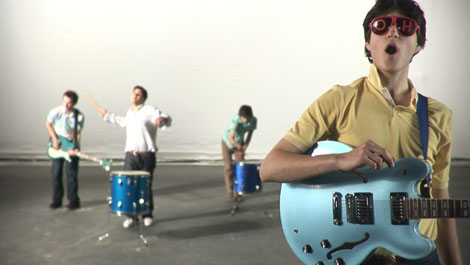 Brooklyn Heights biggest export since Jennifer Connolly, Vampire Weekend, had their London concert interrupted by a fire alarm earlier tonight.  Nabe resident Rostam Batmanglij and the band were midway through "The Kids Don't Stand a Chance" at the ULU Club when the false alarm rang out, according to Brit music publication NME.  The audience and the band were forced out onto the street while authorities investigated.  The group finished their set to a smaller crowd.  Notably absent – Blur/Gorillaz frontman Damon Albarn who was rumored to have pulled the alarm by concertgoers. NME reports that Albarn left the venue 10 minutes before the alarm was pulled.

Vampire Weekend's debut album is out now.  While in London, VW stopped by MTV UK and played their smash hit "Mansard Roof".