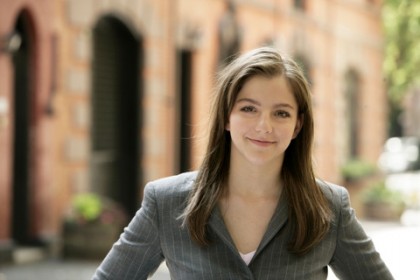 After months of campaigning and with Election Day fast approaching, I would like to take the opportunity to thank so many of you for opening your doors and sharing your time with me throughout my grassroots campaign for Female District Leader. I’ve run a positive door-to-door campaign. Over the last several weeks, Jo Anne Simon’s rhetoric has grown increasingly negative. Unfortunately, instead of engaging with the community on the issues that are important to all of us, my opponent Jo Anne Simon, has relied solely on vicious attacks against me and my family

I’m running for District Leader based on my record and accomplishments, not by slinging mud at my opponent’s character and family.
On this blog, Ms. Simon asked “What is a District Leader?”A very important question, but one that a six year incumbent like Ms. Simon should have answered for her constituency long ago. A District Leader should be a known entity. She should be an accessible leader. As Communications Director to Councilmember Stephen Levin, I work hard every day to ensure that constituents know how to access government resources to help solve their everyday problems.

As a lifelong resident of Boerum Hill, I have never known our District Leader to be accessible to members of the community. Instead she has been disengaged all these years, The District leader has never informed me of a community event, an opportunity to participate, or even of an upcoming election. In many areas of Brooklyn, the District Leader is an important community leader. Unfortunately this is not the case in the 52nd Assembly District.

Over the past five months, it has been a privilege to knock on over 3,000 doors and amazingly, few know who their District Leader is or what they do. This is a depressing reality in the 52nd Assembly District. It is time for a change. It is time for the District Leader to work hard, be available, and encourage involvement in local elections and local politics.

Ms. Simon, a self proclaimed progressive, boasts that no one has run against her club in over forty years. As an actual progressive in the Democratic Party, I’m appalled by her sense of entitlement to holding elected office in this district. I believe democracy thrives on competition, choice, and elections. Ms. Simon is upset that voters have a choice this year. We have a choice between her club and a change.

Unfortunately, Ms. Simon has continually showed that she has no interest in hearing the voice of voters in this district. A District Leader has enormous influence in the location of polling sites in her district. However, voters all over the 52nd Assembly District are disenfranchised by inconvenient polling locations. In most New York City Housing Authority developments, the residents vote in the community center of the development. The residents of Gowanus Houses, a development with over 20 buildings, vote almost half a mile away while a sadly underused community center (due to budget cuts, some of which I have successfully fought against) lays dormant on election day. Why hasn’t the District Leader demanded that Gowanus residents be able to vote in a convenient location? Maybe it is because those residents don’t traditionally support the District Leader, or maybe it is because the residents of Gowanus don’t have the economic means to have a strong voice given the current elected officials in our community. Whatever the reason, it is inexcusable.

This year, the residents of the 123rd electoral district in Brooklyn Heights were shocked to find that their polling site had been moved to DUMBO. This electoral district has a large population of senior citizens. Suddenly, these seniors were faced with the task of traveling over a mile, up and down hills, over and under construction, across intersections without crosswalks, to cast their vote. Where was Ms. Simon? Why was this polling site moved with no notification just days before the election? My running mate, Stephen Williamson, and I worked tirelessly to find a solution to this obvious disenfranchisement of hundreds of voters. After negotiating with the Board of Elections and local community centers, Congregation Mt. Sinai has offered to open up their sanctuary so the residents of the 123rd electoral district can access the polls. Mr. Williamson and I have not been elected, but we worked day and night to ensure that voters can vote. Where was our District Leader?

Ms. Simon claims only she can provide progressive leadership, but her “progressive” agenda can be difficult to follow. Ms. Simon has claimed to be a progressive, independent leader. However she had no problem endorsing a pro-life, anti-marriage equality candidate in the 39th Council District. At one point, she was against housing in Brooklyn Bridge Park. Apparently though, after discussion with the bosses in her democratic club, her position has changed.

Up until recently, she was pro-Atlantic Yards. Suddenly, when it seemed politically beneficial, she became a crusader against Atlantic Yards. Ms. Simon has a picture of herself holding a “traffic calming now” sign on her website. Several years ago, a prominent civic leader worked tirelessly to apply for a grant from the Department of Transportation for a traffic calming study. Ms. Simon, and her cronies, forced the Community Board to reject money the DOT had offered the community. You read that correctly. Ms. Simon advocated for the community to reject city funding for a study on this issue.

Ms. Simon has also changed her mind about my father. At the beginning of the summer, she told the Daily News that my father is an “excellent judge” (Daily News, May 5th 2010). Last week, as retribution for me daring to run against her, Ms. Simon and her cronies filed a confidential complaint against my father with the Judicial Ethics Board and then proceeded to leak the confidential complaint to the press. Ms. Simon claims she wants to take the politics out of the Kings County judiciary. Apparently this doesn’t apply when the daughter of an “excellent judge” gets in her way.

Ms. Simon continuously notes that she is the “reform” candidate. I have seen no reforms in the democratic process or the Democratic Party in the 52nd Assembly District under her watch. The judicial panel she heralds as her major contribution to reform was the brainchild of the man she obsessively attacks with half-truths and outright lies, Vito Lopez.

Please allow me to share with you a video I just made explaining why I am running for District Leader, the problems in our district, and what I have already done to work towards a better community.