By brooklynheightsblog on September 8, 2010 9:36 am in Brooklyn Heights, Election 10 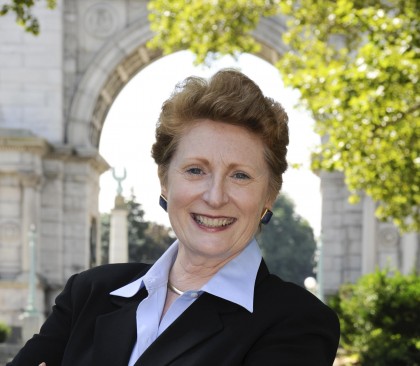 In 2004, I was elected the Female Democratic District Leader/State Committeewoman in the 52nd Assembly District. I am grateful to have had the strong support of our Assemblywoman, Joan Millman. Now, as I run for re-election and knock on doors and talk to voters I am often asked “why should I care about these unpaid party positions. Aren’t they “back room positions?” or “What is a District Leader?”

While the political backrooms are no longer smoke-filled County Democratic Executive Committee meetings are still closed to the public. This, in a nutshell, is why who your State Committeeperson/District Leader is matters. In the most reform minded Assembly District in Brooklyn (the Independent wing of the Democratic Party to paraphrase Gov. Howard Dean), the ability to be independent is critical. That’s something the Democratic voters in the 52nd Assembly District have historically wanted – someone who is unafraid to speak up when poor decisions are about to be made (like when the Party Boss decided to seed the executive committee with ad hoc members of his choosing). We have conscientiously repelled that brand of politics where the Party Boss’ thumb is always on the scale.

In fact, it’s been 40 years since a County chair tried to take over the 52nd Assembly District, something even the legendary Meade Esposito did not do.

The recent unrest in County politics has been punctuated by certain key races and who the 52nd supported. For example, we supported reform Judge Margarita Lopez-Torres for reelection to the Civil Court and two years later, for Surrogate Judge. This is only a bone of contention because years earlier, Judge Lopez-Torres refused to hire a newly-minted lawyer to be her law clerk – a position usually going to those with a minimum of 3-5 years of legal experience. The Party tried to intimidate her into making the hire. She wouldn’t; incurring the eternal wrath of the recent grad’s father – Assembly member Vito Lopez. (Read about this in New York State Board of Elections v. Lopez-Torres.)

But someone did hire her — Civil Court Judge Gustin L. Reichbach, who the following year was elevated to a spot on the NYS Supreme Court. Now, Reichbach’s daughter, Hope – fresh out of college – is running for District Leader. Who could doubt she would be a solid vote for Lopez? Progressive politics? New ideas? Not so much.

In 2005, when Brooklyn Surrogate Michael Feinberg, was booted off the bench as Surrogate Judge for financial shenanigans, Margarita Lopez-Torres ran for Surrogate Judge. The Party feared that Lopez-Torres would be elected and destroy the patronage mill that had operated out of the Surrogate’s court for generations. Boss Lopez prevailed on Gov. George Pataki to create an unnecessary second Surrogate position, and the state legislature voted for the deal. The deal included the appointment of Vito Lopez’ daughter, Gina Lopez Summa, to the NYS Court of Claims. Only three ethical legislators from Brooklyn voted against the Pataki-Lopez deal – Assemblymembers Joan Millman and Jim Brennan and State Senator Marty Connor.

Quick backgrounder: Lopez’ power emanates from the Ridgewood-Bushwick Senior Citizens Council (RBSCC), a multi-pronged social services network in Bushwick. Lopez founded the organization, and his girlfriend Angela Battaglia, a NYC Planning Commissioner, runs the housing program there. They have done a good job improving the lives and housing options of many residents in that area of Brooklyn. But, curiously, election day seems to bring out employees of RBSCC (a tax-exempt, 501(C)(3) organization) in droves. Lopez, the Kings County Democratic Chair, lives with Battaglia in Queens, but votes out of a Brooklyn address.

Desirous of a bench of only qualified judges, my reform allies and I have worked hard to eliminate the mysterious and embarrassing way in which Supreme Court judges are elected.  We lobbied for and succeeded in having instituted a Blue Ribbon panel on the election of judges, before which I testified. As a result the party created a new Independent Screening Panel whose members rotate regularly, to replace the old panel of “regulars.”

Now the County party is not permitted to endorse a judicial candidate who does not appear before the Screening Panel and receive a rating of “Qualified.” Despite this, a few years ago with Noach Dear and just last year with Pam Fisher, Lopez endorsed a candidate who had not submitted to this process – in Pam Fisher, he endorsed a candidate for civil court who had never even worked as a lawyer, but had worked at Ridgewood-Bushwick Senior Citizens Council (RBSCC). In other words, Lopez has endorsed candidates who were ineligible for the County Democratic Party’s support. If rules are in the way, break them.

Brooklynites now have a civil court judge who never even practiced law. Apparently that doesn’t matter to Boss Lopez.  It matters to me.  And it should matter to you.

The Screening panel members rotate based on recommendations from groups of district leaders.  Each group recommends 2 candidates and the County Leader picks one from each group. This year, my group submitted the names of two candidates that were acceptable to all 6 of the group’s district leaders. The Party later refused to tell me which one had been selected from my group. I was told it was confidential, despite the fact that I had forwarded the names to the party’s executive director. I later learned that a third person had been put on the panel as the representative of our group.  If rules are in the way, break them.

Lest this seem like sour grapes, I won’t discuss the securing of the City Council seat last year for his staffer, Steve Levin (formerly employed by RBSCC), except to say that Lopez secured the political support of a certain block of voters through a land use deal – Broadway Triangle – that is now in court because of what appears to be corruption in the awarding of site control to RBSCC and the United Jewish Organizations of Williamsburg. (For the record, I supported the diverse, community –based Broadway Triangle Coalition which sought a meaningful role in the project.) If rules are in the way, break them.

Last fall, Boss Lopez supported a challenger to his one-time protégé, Councilwoman Diana Reyna.  When Reyna won the primary and became the Democratic Party nominee, Lopez, chair of the Kings County Democratic Party, supported a candidate from another party – his current co-district leader, Maritza Davila, who happens to work at – you guessed it, RBSCC.

Simultaneously there was percolating in the Assembly a battle over a bill that would extend the statute of limitations for childhood victims of sexual abuse at the hands of education officials to age 26, including a one year window for those who were already over the current limit, age 21.  Because of its unpopularity with certain religious communities, one of which would later come out in force to elect his hand-picked candidate in the 33rd council district, Lopez withdrew his prior support for the bill and floated a weak alternative.

On election day, to the consternation of many, the Bishop of Brooklyn made robocalls in support of Vito Lopez – who wasn’t even running for office – to the voters of the 34th city council district where Lopez’ candidate Davila was running against Democratic nominee Councilwoman Diana Reyna. If rules are in the way, break them.

Just a few weeks ago, Vito Lopez again made headlines by pressuring a city employee to lie in court proceedings brought by Lopez to throw his Primary opponent off the ballot. If rules are in the way, break them.

The team seeking the support of Democratic voters for male (Steve Williamson) and female (Hope Reichbach) State Committee/District Leader is wholly supported by the Brooklyn Party Chair, Vito Lopez.  New Ideas?  New Leadership? With all due respect, this kind of new we don’t need. Because when rules are in the way. . .