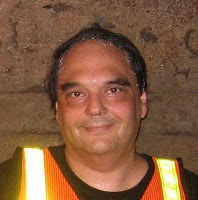 The Brooklyn Eagle reports that tours of the Atlantic Avenue tunnel are done. Mcbrooklyn adds that the Atlantic Tunnel hero Bob Diamond is leaving Brooklyn, possibly because he can’t fight Borough Hall. Though he found the oldest subway tunnel in the world right underneath Atlantic Avenue, he has been unable to get the ok to tear down the underground wall he believes hides its train.

Diamond has been long frustrated by the city’s bureaucracy in his attempts to break through a back wall of the Atlantic Avenue tunnel in search of a long-rumored historic locomotive, and in his dream to rebuild Brooklyn’s trolley system.

He accused Joseph Palmieri, the city Department of Transportation’s Brooklyn commissioner, of “sitting on grants” secured by Congresswoman Nydia Velazquez and others that could have been used for a streetcar system in the borough.

Diamond says that his Sept. 12 tour will be his last.