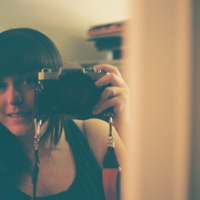 Caitlin Pasko, a Brooklyn Heights newbie and BHB reader, also wears the hat of songstress. As Lacrymosa, she’ll perform at The Living Room on September 5, 19, and 26 at 8pm in the first residency of her career.

The reason Caitlin, 22, calls herself Lacrymosa is not for a particular love of Mozart (it’s the name of a sequence from his Requiem), but because of a significant memory. “I sang it in tenth grade chorus, and it was sort of like a time when I came out of my shell,” she told me, her voice as adorable as this heartwarming story.

A recent NYU grad by way of Virginia Beach, the real world has been “a lot scarier” than Caitlin expected. But her resume speaks to a certain fearlessness: since her sophomore year of college, she has been performing at New York City venues like The Sidewalk Café, Pianos, and, more recently, the Bowery Ballroom.

Lacrymosa’s sound is soft and airy, but substantial, what Caitlin described as a mix of her two favorite artists Joanna Newsom and Regina Spektor. “I feel like I’m darker than Regina Spektor, but lighter than Joanna Newsom,” she explained. Her first album “I Was Once (Oh)” came out in 2009; her next, “Selah,” will debut on September 5, the date of her first show at The Living Room. Both albums are on the Family Records label.

Like Spektor, Caitlin is a pianist combining classical and pop music. She’s nervous about the residency at The Living Room because the goal is not merely to entertain the audience for one night, but to convince them to return for two successive shows.

“It’s usually just me,” she said of her typical performance setup. “But for the next three shows I’m going to try to have a sitar player, some strings, some drums, and a sax.”

A Brooklyn Heights resident since July, Caitlin loves Bread and Butter on Henry Street, and has taken a quick liking to the neighborhood, both for its beauty and because the people are just so darn friendly.

“When I moved here I told my mom that I’ve moved to the land of the nice people, and she didn’t believe me,” said Caitlin. “And when she came and visited, she was like, ‘You are right!’”

Maybe some of those nice people will make their way to see one (or all) or Lacrymosa’s shows at The Living Room. And buy an album or two. Let’s not change Caitlin’s mind about us.