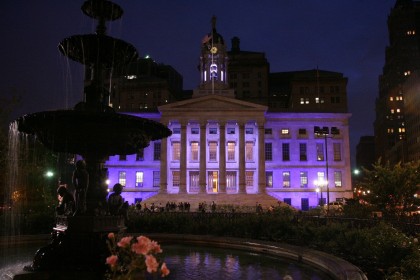 Brooklyn Borough Hall will be lit tonight and through the weekend in blue and white to honor the 100th anniversary of Mother Teresa’s birth.  In a press release borough president Marty Markowitz says, “We are proud to honor the life and legacy of Mother Teresa at Borough Hall,” said BP Markowitz. “Borough Hall may not be as tall as the Empire State Building, but it is Brooklyn’s oldest public building—and one of the oldest in New York City—and what better place than our diverse borough to celebrate not only Mother Teresa but people and groups of all faiths—including Brooklyn’s large Catholic community—who have made great contributions to the world.”