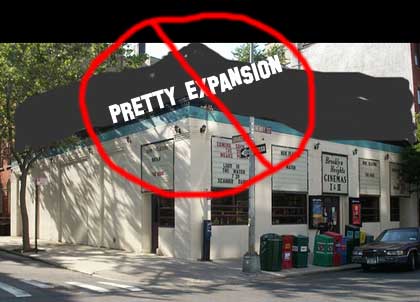 From the BHB Inbox comes a note from "L" who is against the recently announced plans to expand the Brooklyn Heights Cinema:

Bogus Plans for Brooklyn Heights Cinema Should be Aborted
Sometimes bigger is NOT better and the new plans for the Brooklyn Heights Cinema is a case in point.  I just saw "The Savages" yesterday, 01/26/2008.  The screen was in TERRIBLE disrepair and has been for years.  Yes, the staff is wonderful and very accommodating.  And, I do go to this theatre as often as I can, just to support the sweet management and convenience.  However, the additional plans will not only throw good money away, it will be destructive.
Several current services need serious improvement.  Due to the poor quality of the screens, I can't even drag family members to join me.  Luckily, I've friends who put up with inferior viewing.  As to the sound, even with pre-programmed trailers, the staff could monitor it better, manually when NOT asked.  The "new" seats are no longer in their prime.  And the temperature of the theatre itself is often questionable.  All year, I've learned to take added layers of clothing for myself and for partners.
The management's core objective — to show/sell viewings — seems always to be in jeopardy.  During four of my last five visits, there were fewer than ten other attendees.  Yesterday's audience size was startling.  The house was 60-70% full.  Adding a bar can only foster the possibility of having loud-mouths.  Adding a restaurant is more nonsense, especially when area restaurants already do their thing; some of those restaurants continually fail.  If doubling the size of the theatre attracts car traffic, that would be bad for the locales.  And, the reduced current screenings already make attendance a challenge.
The bottom line is that viewing, sound, comfort is just barely adequate, but only for those who — along with their film selections — let convenience be THE major factor.  Happily, the management IS a caring, hard-working group.  Their efforts ARE appreciated.  Still, I advise the management of the Brooklyn Heights Cinema to forget all the grandiose and destructive plans.  I suggest they build their audience by improving quality within the current parameters.  There's lots of room for improvement.