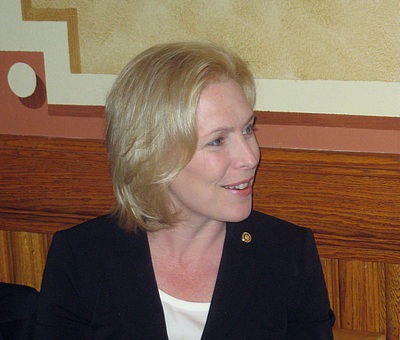 U.S. Senator Kirsten Gillibrand (D-NY), appointed by Governor Paterson to fill the unexpired term of Hillary Clinton, and now facing election on a statewide ballot for the first time, visited Brooklyn today and met with local journalists, including your correspondent and BHS colleague T.K. Small, at Teresa’s. She discussed several issues of interest to Brooklyn voters, including federal support for mass transit, facilitating lending to small businesses, gay and lesbian rights, health care, and government transparency.

A native of the Albany area, educated at Dartmouth College and UCLA Law School, Gillibrand spent the first ten years of her career in New York City, first as a clerk to a federal Court of Appeals judge, then as an associate at the prominent Manhattan law firm Davis Polk & Wardwell. After that, she worked in Washington as Special Counsel to Secretary of Housing and Urban Development Andrew Cuomo. She then moved back to Upstate New York and was in private law practice until, in what was regarded as a stunning upset, she was elected to the U.S. House of Representatives from a district that had been solidly Republican for many years.

Sen. Gillibrand spoke briefly about some matters she’s been addressing during her first term. She drafted a bill to repeal the military’s “don’t ask, don’t tell” policy concerning lesbian and gay service members. She is also behind a bill to facilitate lending by community banks to small businesses, a problem in today’s economy because the banks have been weakened by their investments in real estate. The Senate committees on which she serves are Environment and Public Works, Agriculture (she’s the first New Yorker to serve on this committee in forty years), Foreign Policy, and the Special Committee on Aging. On this last committee, she’s concentrated on combating fraud against the elderly. She stressed her commitment to greater transparency in government, to which end she discloses her full daily schedule, including meetings with lobbyists, on her website.

BHB contributor T.K. Small asked the first question: Why didn’t the Community Choice Act, which would allow Medicaid funding of home care as an alternative to institutionalization in a nursing home, get included in the final version of the Obama Administration’s health care bill? Gillibrand described this as a “missed opportunity”, observing that home care is often more cost-effective than institutional care. As a follow-up, she was asked if the GOP threat to repeal the health care act was a real threat, or just political posturing. She said it was the latter.

Your correspondent then asked if she thought there is any prospect for additional federal aid to mass transit, referring to the MTA’s present difficulties. She noted that New York City accounts for fifty per cent of the mass transit usage in the U.S., and said she saw her job as facilitating the MTA’s access to funds. To advance toward that goal, she supported the Administration’s energy bill, which would have provided substantial additional federal funding for mass transit. Asked if Senators from less urbanized states opposed mass transit funding, she said some support it because it provides funds for projects in smaller cities. She also noted that, for every dollar New York sends to Washington, it gets about seventy cents back.

One of the reporters present told her of the “decrepit” condition of the World War Two memorial in Cadman Plaza Park. She said she would look into this, and also told of her efforts on behalf of veterans, including sponsoring a bill to allow tax credits to employers who hire them.