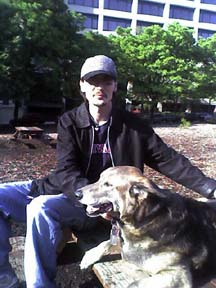 Ivaylo Ivanov (pictured here with his dog Ruka), the Remsen Street resident nabbed with an arsenal of guns and pipe bombs on Sunday has admitted to being the person who scrawled swastikas on area synagogues last year. (Photo courtesy of Hillside Dog Park)

New York Sun: Man in Pipe Bomb Case Confesses…: Police sources say a man who had gathered an arsenal of pipe bombs and weapons in a Brooklyn Heights brownstone apartment has admitted to painting a series of swastikas in the neighborhood last fall that marked a spike in hate crimes around the city.

Ivaylo Ivanov, 37, was arrested and charged late yesterday after police discovered firearms and bomb-making equipment along with seven pipe bombs in the attic apartment he shared with a nationally renowned AIDS researcher, Michael Clatts.

Brooklyn Eagle: According to the New York Post, Ivanov had been a closely watched subject in relation to the Sept. 24 hate graffiti – swastikas as well as racial slurs like “kill the Jews.” The graffiti was found spray-painted on the Brooklyn Heights Synagogue and the B’nai Avraham synagogue, both less than two blocks away from Ivanov’s home, as well as on several buildings on Columbia Place.