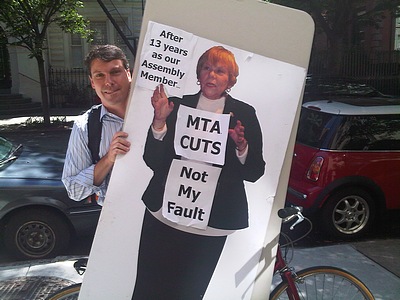 Brooklyn Heights resident Doug Biviano, who is challenging incumbent Joan Millman in the September 14 Democratic primary for the nomination to represent the Heights and nearby areas in the State Assembly, was seen on Montague Street last week carrying a cardboard poster of his opponent with the words “After 13 years as our Assembly Member…MTA CUTS Not My Fault”. “Why isn’t Joan Millman showing leadership on this issue?”, Biviano asked. “Millman has not offered one way forward. Brooklyn deserves a representative with a strong voice and the engineering know-how to get the job done in these times of need.”
Share this Story: