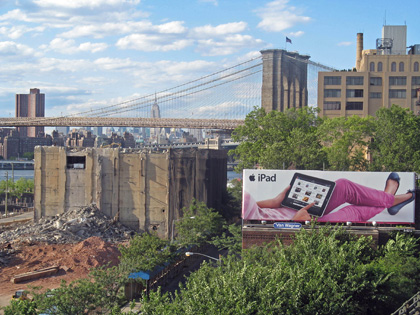 Demolition of the National Cold Storage Warehouse on the landward side of Pier 1 has opened up views of the Brooklyn Bridge from the Promenade (compare photo below, taken on May 7 of this year). 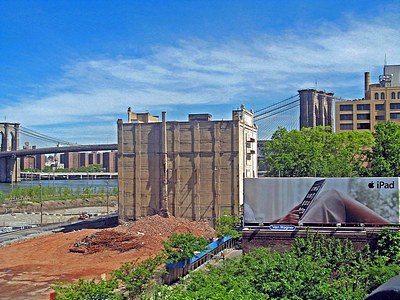 More photos and text after the jump.

While a building to house a small hotel as well as apartments is, under previously announced plans, meant to occupy the space where National and two smaller, flanking warehouses previously stood, construction of any such commercial or residential structures to generate revenue for the park is, under the deal pursuant to which the City asumed responsibility for construction and maintenance, subject to approval by local elected officials. In any event, the structure planned for the space is no higher than what now remains of the National building, so the view plane shown in the top photo is safe from encroachment. 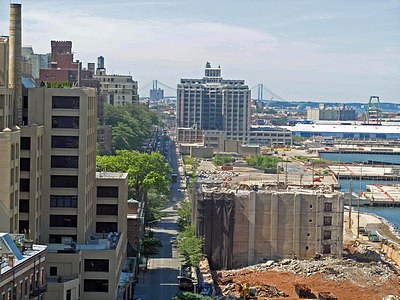 The view from the bridge is also opening up as the National building comes down. 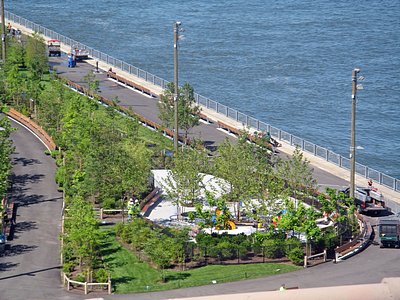 Another instance of addition by subtraction is the previously noted removal of the overheating domes from the playground on Pier 1. The Village Voice had this to say:

Brooklyn parents, imagine what you could do if you used your powers to fix the oil spill.

The Voice also noted, quoting the Times City Room item to which our earlier post linked, that the domes are to be replaced by a “red house” and a “fairy castle”. Concerning this, the Voice writer opined that “a red house” might “subliminally reinforce latent Communist beliefs”; and, as to “a ‘fairy castle’ — well, we’re not even going to go there.”