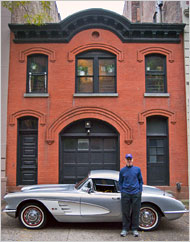 New York Times: Injected with Inspiration: Mr. Hyde drove the silver-and-white Fuelie from San Francisco to Cambridge, Mass., in 1965 to attend Harvard Business School. He met the woman who would become his wife, and he took her on their first date in the Fuelie. “There were some issues with the seats at the time, so I had them removed to be fixed,” he said. “Phyllis sat on the floor.”

He and Phyllis moved to New York and settled in Brooklyn Heights. Mr. Hyde established himself as a real estate and investment banking consultant, while she raised their son and daughter. (Now their roles are flipped: he is at home, and she has a medical practice.)

In his free time back then Mr. Hyde read enough books on motor sports to fill the shelves of a room in their attic. He also enrolled in racing school, and in 1966 bought a Corvette racecar with the goal of competing on the track, as his idols had done.