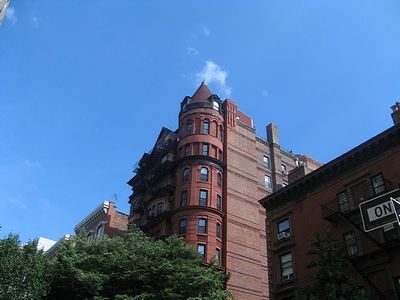 I’ve lived across the street from this Romanesque revival (a style I love) building for many years, hearing here and there that Arthur Miller had lived there; alas, not with Marilyn Monroe. I now know, thanks to Brownstoner that it was designed by Montrose Morris, an architect known for many distinguished Brooklyn apartment buildings completed during the late nineteenth century.

Addendum: Reader Clintonius Wow, with confirmation by nabeguy, says 62 Montague was also home to underground film maker Marie Menken and her husband, who were the models for George and Martha in Edward Albee’s Who’s Afraid of Virginia Wolff?