When I was a kid, my mother used to warn me not to step in “the gold” left on the street by neighborhood dogs.   It was much classier than dropping the “s” bomb I guess.  Anywho, that was before the awesome Fran Lee went on a tirade back in the 1970s and got NYC to pass its famed “Pooper Scooper” law.

Well, it seems that some dog owners –  close to 40 years after Ms. Lee won her battle against poo – still haven’t gotten the memo as this reader writes:

Dear Homer – On my three block walk to get a paper this morning I noticed no less than five fresh mounds of dog crap on the sidewalk. What the hell is going on around here. This non-pooper scooping business is getting way out of control. I have photographed a few of the human offenders from my window and I’m wondering if you would like to post them on your site. Let me know.

Your tired of stepping in dog crap neighbor,
Anonymous

PS I have attached a photo of some fresh evidence for your use.

That “evidence” is after the jump. IT’S NOT PRETTY.  CONTINUE AT YOUR OWN RISK. (Oh and we won’t be publishing photos of human offenders.) 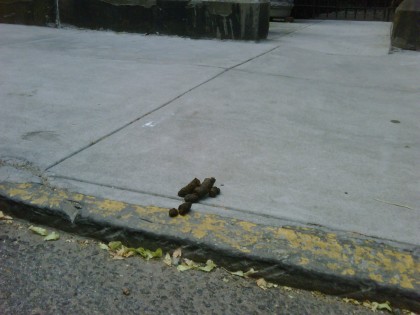