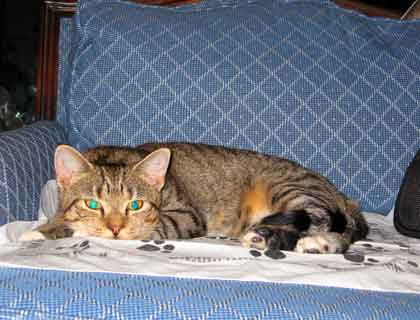 "Marta" writes the BHB Inbox regarding a feline rescue:

Please post a story regarding a female kitten who haunted the Brooklyn Bridge footpath in Cadman Plaza Park during late September.  She was caught on 1 October and is now living in a much safer environment (with me).  Bella has had her first vet appointment (very reluctantly) and was declared feline HIV, leukemia and worm free.  I met cat lovers (presumably coming off the Brooklyn Bridge) from all over the world while feeding/tending to her when she was still in Cadman Plaza. She was such a charmer/social butterfly that many people also fell under her spell. I know of others who were also looking after and trying to rescue her, so they must be wondering what's become of her.  I tried to inform everyone of her happy outcome by placing this announcement along the footpath 2 weeks ago.

An "announcement" was posted near the Brooklyn Bridge footpath earlier this month as well (download PDF).  Bella the Cat is now living on Pineapple Street.