Mack the Knife in the Heights 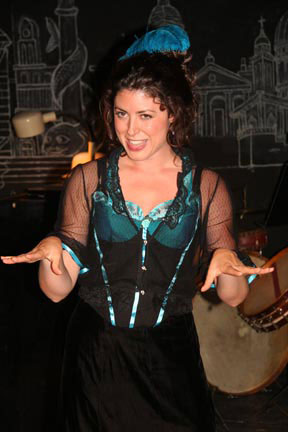 Heights Players: Based on John Gay's The Beggar's Opera, the musical was originally presented in German in 1928; there have been several English translations over the years. We are presenting the Mark Blitzstein version, which had a long run Off-Broadway, featuring such well-known performers as Lotte Lenya, Jerry Orbach, Charlotte Rae, Edward Asner, Beatrice Arthur, Jo Sullivan and John Astin.

Starring as the rogue Macheath in our production is Fabio Taliercio. Taliercio is well known to our audiences from his appearances as Lancelot in Camelot, Tommy in Brigadoon and as the winner of last season's Gala, Dancing With the Heights Players Stars.

Appearing as the women in his life are Sarah Arikian as Polly Peachum, Alea Vorillas as Jenny Diver and Patricia Santomasso as Lucy Brown (pictured, left). Ms. Arikian appeared last season as Mother in Ragtime and Marian in The Heiress. Ms. Vorillas made her debut on our stage several seasons ago as Dainty June in Gypsy and was most recently seen as Cunegonde in the Workshop production of Candide. Ms. Santomasso brings a strong musical background to her Heights debut.