Channel 11 Interviews BHB Publisher and Reader About Chop the Choppers 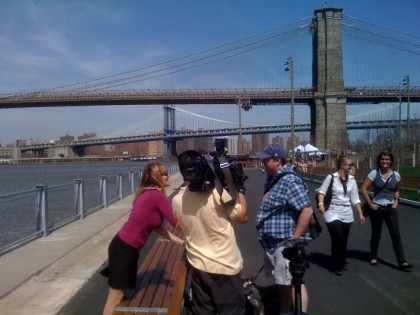 BHB Publisher John “Homer Fink” Loscalzo and BHB reader/Brooklyn Heights resident Drew Burchenal were interviewed today by WPIX-TV’s Monica Morales about the campaign to Chop the Choppers taking off and landing from the Downtown Manhattan Heliport.  Burchenal was interviewed in his apartment and on the roof of his building while Homer pointed out the throngs of whirly birds over Brooklyn Bridge Park’s Pier  1.  The piece will air tonight on channel 11’s 6:30pm and 10pm newscasts.

Homer has suggested a 4 hour quiet period and no night flights, while Burchenal would like the city to return to an all out ban on tourist flights.