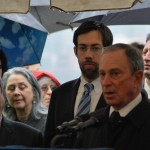 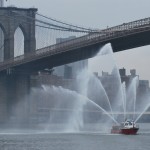 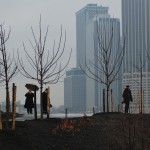 A rainy morning could not dampen the spirits of the hundreds who turned out for the Brooklyn Bridge Park Pier ribbon cutting ceremony–a day over a quarter century in the making.

Many past and current elected and appointed officials were on hand including Mayor Michael Bloomberg, Gov. David Paterson, Brooklyn Borough President Marty Markowitz, Assemblywoman Joan Millman, Senator Daniel Squadron, Parks Commissioner Adrian Benepe, BBPDC President Regina Myer, and many others too numerous to mention were beaming in the misty weather.  Many civic leaders and local citizens who have toiled tirelessly were also there on this historic day.

The park is beautiful and in this humble correspondent’s opinion the early plans and photos don’t do it justice.  Go see for yourself, and enjoy NYC’s newest parkland!