More Photos from Yesterday’s Fire on the Brooklyn Bridge 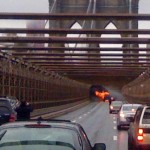 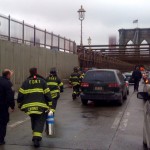 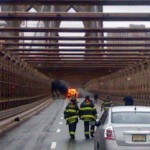 BHB Reader Cynthia Lawson posted Facebook photos of yesterday’s SUV fire on the Brooklyn Bridge.  The blaze shut down the Manhattan bound side of the span as FDNY responded.  No injuries were reported.

On Sunday, March 14 around 3:45pm I was on the ramp on the Brooklyn side of the Brooklyn bridge and noticed a car on fire in the distance.

I, along with most cars around me, stopped and even backed up a bit. Ten minutes later, the police arrived, followed by firemen who extinguished the fire.

These are some images from the whole sequence of events. All were shot on an iPhone and I cropped into the scene, which is why the quality is not great.

YouTube user narunass caught the fire on video from the Manhattan Bridge: