By brooklynheightsblog on February 2, 2010 1:10 pm in Architecture, Arts and Entertainment, Cobble Hill 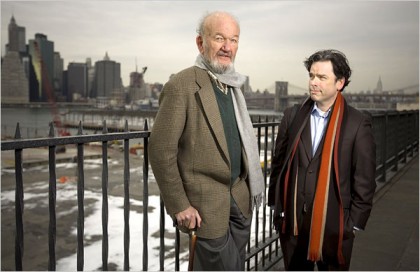 When Norval White, who passed away in December, was working on the latest edition of his AIA Guide to New York, he knew it was going to be the last one with which he was involved. With both the future in mind and needing assistance–in his eighties, his mobility wasn’t what it was–he enlisted the help of City College assistant professor Fran Leadon in completing the edition.

Leadon, who lives in Cobble Hill, was referred to White by another CCNY professor, who knew both. White had founded the architecture department at City College and taught there for more than twenty-five years, before retiring and moving from Pierrepont Street to France, with a stop in Connecticut.

Even with White back in France, Leadon, with a legion of his own students, was able to carry out the leg-work that allowed the fifth edition of the “go-to” guide of NYC architecture to get completed.

An article in the Times back in the spring mentioned that Leadon was also a musician, which is how I knew him – as a singer for the Brooklyn bluegrass band, the Y’all Stars. Last week,I contacted Mr. Leadon to ask how the book was going, and when the next Y’All Star gig was. Though in the Times he was self-effacing about his avocation, he is an accomplished musician, and grew up in Florida, listening to bluegrass, folk, country and honky-tonk.

I’m told the Guide is almost done – it’s being proofread right now, and is available for pre-ordering on Amazon. As for the Y’all Stars, Leadon described them as on “hiatus”, as several members or their partners have recently had babies. In fact, Leadon and his wife are expecting their first child.

Perhaps though in a final fling with nap-time-less freedom, he played with his own band on Saturday at Freddy’s, the Prospect Heights bar under imminent threat of demolition for Bruce Ratner’s Atlantic Yards.

I got myself down to the gig, and it was a fine show. The songs were all his, and the band was aces. Part of Brooklyn’s thriving bluegrass and traditional music scene.

Here’s “My Nashville Rose”, and more can be found here.

Grace Church Winterfair Next Saturday
Is There a Stalker on Hicks Street in Brooklyn Heights?