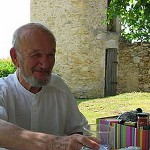 Norval White, architect, author, and long time Heights resident, died at his home in Roques, France on December 26, at the age of 83. As Henrik Krogius noted in the Brooklyn Eagle:

His own Brooklyn Heights brownstone served him with examples of noteworthy architectural elements. Norval C. White, co-author of the important AIA Guide to New York City, celebrated many Heights buildings in that work, as well as in his more personal “bouillabaisse of a book,” The Architecture Book (1977), about which Paul Goldberger wrote that “it has a breezy irreverence that seems especially correct as a basis for an architectural viewpoint today.”

Krogius also points out that, in his writing, White used details from his own brownstone at 104 Pierrepont Street to illustrate architectural concepts.

This New York Times article from last year describes White’s work with his new AIA Guide co-author (the co-author of the first four editions of that work, Elliott Willensky, also a Heights resident, died in 1990), Francis Leadon, a Cobble Hill resident, on the fifth edition of the Guide, which was completed before White’s death and will be published this year.