P.S. 8 Does The Bard or These Little Shadows Are Too Cute to Offend 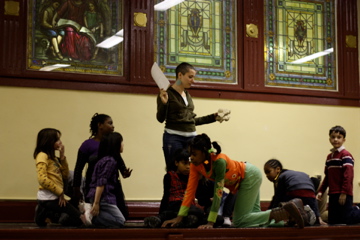 No one is ever too young for Shakespeare, and PS 8’s third and fourth graders are about to prove this with their upcoming performance of A Midsummer Night’s Dream.

The performance is part of the drama program started by Noel Gentile three years ago.  Until recently, the productions mounted by the students were original pieces tackling issues such as the culture divide, racism, and the environment. However, because the new dates for New York State standardized tests left little time to develop the student’s original pieces, Gentile opted for a production of the Bard’s most famous comedy.

But how well can an eight-year-old understand texts that scholars spend a lifetime poring over?

“We started with simplified versions of Midsummer, so the kids could get a basic idea of the plot. Then we moved on to individual scene study so the cast could fully understand what was going on,” Gentile said while supervising children who, fresh from a rehearsal, were waiting to be picked up by their parents.

Gentile edited the five-act play, which generally has a running time of 3 hours, to a 40- minute show.  However the text has not been simplified. With 31 actors, 12 dancers, and props, costumes and scenery all created by the students, this production will certainly be a formidable accomplishment for these youngsters.

“They have far surpassed out expectations,”  Gentile said proudly.

Midsummer Night’s Dream will be performed on February 5th and 6th at 6pm.  There is a $5 suggested donation.