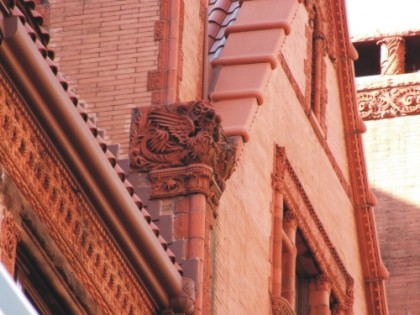 Brownstoner has a neat article on the architect Frank Freeman, who has been called “Brooklyn’s finest architect” by the late Norval White.

Perhaps his most famous building is the Herman Behr Mansion, which is right on my corner. Built in 1888, it’s now apartments, but at one time was a hotel, a bordello, and a home for Franciscan monks (not all at the same time). It was sold a few years ago, and recently has undergone a cleaning that brought out some of the really beautiful details.

There are always tourists clutching AIA guidebooks and snapping photos. The bit of history I like most about the place is that the original owner’s son survived the sinking of the Titanic.

Not only did he survive, his story may have been a loose inspiration for the plot of the eponymous movie directed by James Cameron. As well as being the son of Herman Behr – an industrial magnate, Karl Behr was a well known tennis-star and was seeing a Miss Helen Monypeny Newsom, whose mother had taken her to Europe to break-up the two. Behr made-up an excuse to go to Europe, and when mother and daughter booked passage on Titanic for their return to the States, Behr got a ticket as well.

They all ended up in the early morning of April 15th, standing together in front of Lifeboat #5. J. Bruce Ismay, managing director of the White Star Line, (and often regarded as a villain), was telling people to get into the boats. He was asked by a woman in Behr’s party if they could all get in. Ismay said, “Of course, madam, every one of you.”

Unlike the movie though, there’s a happy ending. Neither an iceberg or Mrs. Newsom could keep the couple apart. They were married a year later in Manhattan and had four children.

As glad and lucky as I feel to come home at end of the day, I bet when Karl Behr turned the corner of Henry and Pierrepont after his North Atlantic adventure, it felt even nicer.

Brooklyn Heights was the first landmark-protected neighborhood in New York; unfortunately quite a few of Freeman’s other works fell to the wrecking ball before landmarking went into effect. Another, the Margaret Hotel, at Columbia Heights and Orange Street, burned in 1980. Yet another still stands, on Pierrepont Street a block away from the Behr Mansion; it’s the Crescent Athletic Club, now home to St. Ann’s School. 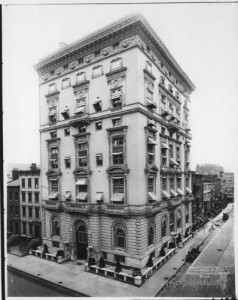