The Talk of the Town

By brooklynheightsblog on January 11, 2010 4:21 pm in Transportation 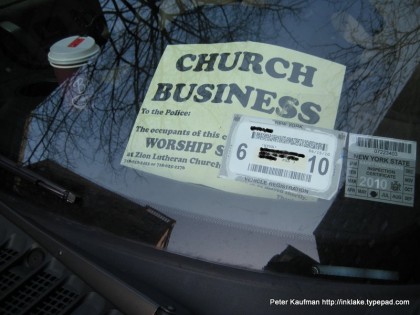 This week’s New Yorker has a piece on the parking placard abuse that continues despite the mayor’s vow to crack down. (free registration to read).  The bomb scare in Times Square on New Year’s eve was occasioned by a van with a phony placard that had sat unmolested by the NYPD for days.

There seems very little point in limiting the number of genuine placards issued, if people are free to make their own.  The article mentions the First Presbyterian Church’s ‘we’re praying’ windshield signs, which apparently confer ticketing immunity – even in a bike lane, as well as the bogus ‘on medical call’ signs that plague the neighborhood.

I took these pics on Pierrepont Street. How do I become a member of the Fraternal Order of Amtrak Police?