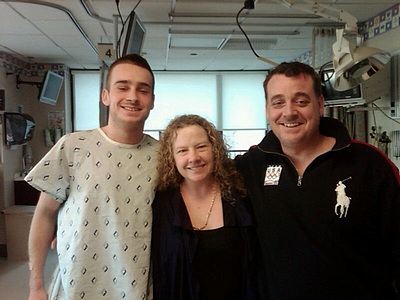 Visiting Brooklyn proved a bit more exciting than planned for a British teen and his dad (shown above with Dr. Caitlin Jones of Long Island College Hospital), who were forced to extend their holiday stay here when the lad developed an abscess the size of a golf ball in his throat, and was taken to LICH for emergency surgery. After the ordeal, the homesick pair were treated to dinner by the Atlantic Chip Shop. In LICH’s words:

Keaton Bishop, a 17-year old British teen “on holiday” with his family, expected to do the things all first-time visitors to New York do – sightsee, shop and take in a Broadway show or two. Instead of returning to college and his South Yorkshire home before Christmas, however, Keaton and his dad, Paul, experienced something else entirely: Brooklyn emergency medical care – and hospitality.

What began as a sore throat rapidly developed into a severely infected abscess of the tonsil, a condition known as peritonsillar abscess. It nearly suffocated the teen, who was brought to Long Island College Hospital (LICH) fighting for his life. Caitlin Jones, MD, assistant director of the Emergency Department, rapidly diagnosed Keaton’s condition, called for an otolaryngologist (ear, nose and throat specialist) and raced him to the Operating Room for emergency surgery. “We had Keaton from the ER to the OR in less than 30 minutes,” says Dr. Jones. Richard Rosenfeld, MD, MPH, Chairman of the Department of Otolaryngology, operated on Keaton. “The abscess was the size of a golf ball,” he noted. David Fishman, MD, the anesthesiologist who performed an extremely complicated intubation, was also critical in saving Keaton’s life.

Unable to travel home due to the risk of post-surgical bleeding, Keaton and his father remained in Brooklyn over the holiday. A joking reference to having their Christmas dinner at Brooklyn’s English-style Chip Shop restaurant led to a genuine invitation from Christopher Sell, the owner, who generously gave the Bishops a little taste of home.

A few interesting – and colorful – coincidences: Keaton is from Dorcaster, Yorkshire, home of William Bradford, one of the leaders of the Puritans who sailed to America aboard the Mayflower and served as a governor of the Plymouth Colony. Additionally, Keaton’s throat abscess, also known as quinsy, was the condition which led to the death of our first president, George Washington – who fought the British at the Battle of Long Island, also known as the Battle of Brooklyn. The August, 1776 clash was the first major battle of the Revolutionary War following the U.S. Declaration of Independence.

Of course, all is long forgiven between our two countries who now enjoy a “special relationship.” Keaton and Paul Bishop returned home after the New Year, declaring Brooklyn to have been the best place to be – under the circumstances. 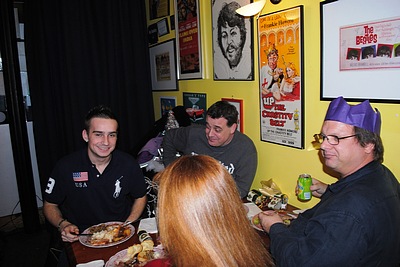