The New York Times has a piece today on the Floating Pool Lady: 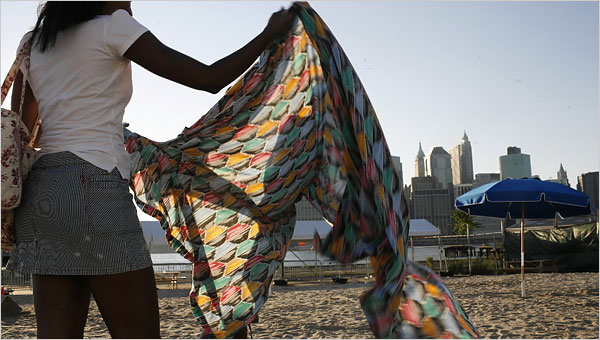 New York Times: Coney Island on the Mind: A faux beach opened two summers ago in Long Island City, Queens, accessible by water taxi. If I’m going to take a taxi, I might as well go to the airport. So off I go, to the newest hybrid, the Floating Pool Lady, a large swimming pool on a barge in the East River, and a “beach” made of genuine sand, rimmed by burlap and plunked in a concrete lot. The beach, which opened on July 4 near the foot of Joralemon Street, just off Brooklyn Heights, looks like an egg yolk sizzling in the sun.

A second egg yolk a small distance away holds soccer nets and room for beach volleyball. If, from my towel, I look only at my polished toenails covered by sand and only five degrees to my right, where an Asian couple on beach chairs is persuading their 7-year-old daughter to wear sunscreen, or five degrees to my left, where two young women in black bikinis are lying belly down on colorful towels, reading fashion magazines, I do believe that I am at a beach.

Where Can They Get Their Hair Did?
Yassky: No Hall Passky for Walentas