Watchtower to Soap Box Derby: NOT ON OUR HILL! 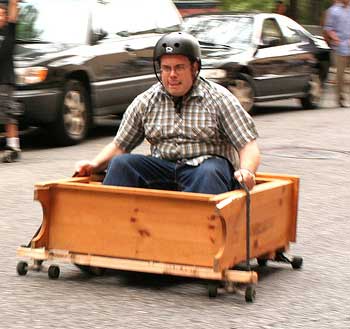 John Mejias the organizer of the annual Paping Soapbox Derby that has wowed spectators on the steep Columbia Heights hill for the last couple of years, tells BHB that it will not take place in Brooklyn Heights this year.  The organizers of the race, which features homemade racers bearing names like "The Armoire", attempted to go through proper channels for the 2007 running, applying for a block party permit, presenting to CB2 and finally approaching The Watchtower for their permission to race on the hill. The Watchtower has denied their request, preventing Brooklyn Heights from hosting one of New York's most exciting and inclusive events. Mejias tells us that the race will happen later this summer in the Bronx.

Time to Get Wet
The View from France