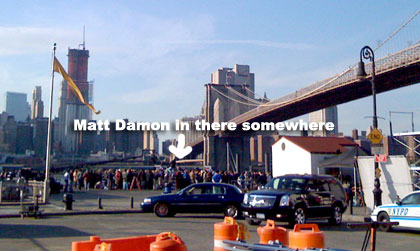 Matt Damon is filming The Adjustment Bureau – based on the short story by Phillip K. Dick – on Fulton Landing today.  A BHB tipster sent in a photo (hey that’s the closest he could get, aight?) and this description:

It’s hardly a good photo, but it’s the best I got from my phone.  The whole Fulton Ferry Landing is closed off, so that big crowd is all part of the movie.  It looked like it was supposed to be some some sort of campaign rally.  People were holding up “Norris” signs, which is apparently Damon’s character in the film.