This morning several thousand recovering alcoholics and drug addicts and their family, friends and supporters marched across the Brooklyn Bridge and gathered on Cadman Plaza’s Astroturf for this year’s A&E Network Recovery Rally. Smokey Robinson and his band entertained the crowd, opening with his 1965 hit “Going to A Go Go” (see clip above). 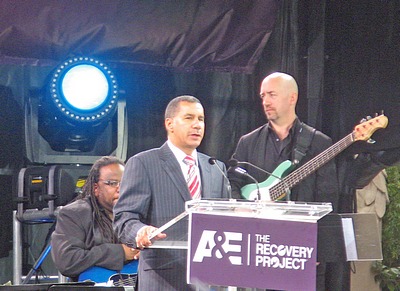 Before Smokey took the stage, Governor David Paterson spoke briefly, noting New York State’s recent repeal of the punitive Rockefeller drug laws, which prescribed harsh sentences for possession of small amounts of illegal drugs. He said the state is now committed to a regime of treatment instead of incarceration for drug users.
Share this Story:

Kucinich in Brooklyn Heights Today, Endorsing Biviano in Herd for the 33rd
Kucinich: We Need Doug Bivianos in City Councils Across the Country