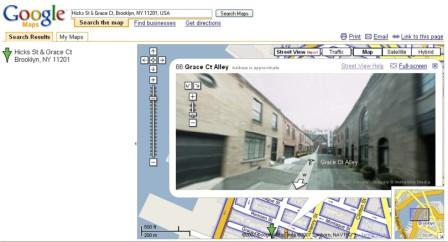 Last week the monolith known as Google launched an eerie new additon to it's mapping service called Street View. This new feature enables users to type in an address, select "Street View" and see a street level photo of that location. It also allows folks to "virtually" walk through a neighborhood. It's fun and Orwellian all at the same time. Certainly both 8th Graders and Evil Doers are very amped up about this new product.

Google Earth will map every city in America with its dazzling and amazing new "Street View" feature . . . I went home again yesterday. Who says you can't go there? I started at the corner of Hicks Street and Grace Court – my home stickball field street in Brooklyn Heights more than 60 years ago. I moused slowly toward the dead end that now overlooks the Brooklyn-Queens Expressway, past historic Grace Church. On my left were brownstones dating to the mid-19th century, now renovated into seven-figure townhouses. The McMeekin twins, Bobby and Freddie, now retired LA cops, lived in that one. On the right were wrought-iron fences enclosing the backyards of brownstones on neighboring Remsen Street. At the end of the backyards are a narrow six-story apartment building and the four-story brownstone where Arthur Miller, the great playwright, lived after "Death of a Salesman" made him rich. Across the street was the half-block stretch of No. 2 Grace Court. There was the entrance courtyard that had a uniformed doorman until Pearl Harbor. There was our fourth-floor apartment – Apartment 4-O, my parents' room on the corner, the three windows of the living room, the small room brother Jim and I shared out of view. And there was third base – a fire hydrant that served apartment buildings No. 19 and No. 1. And the manhole cover that was home plate. In a friend's apartment in 1947, I saw my first ever TV show on a 6-inch screen that flickered with ghost images.