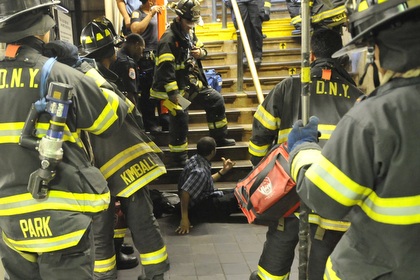 It took some wriggling, courtesy of the Fire Department, to assist this straphanger who took an express route down the stairs at the Borough Hall station, and ended up with his foot caught between the bottom step and the railing’s vertical support.  It happened just after 6:30 tonight on the stairs below the Municipal Building.  Engine Co. 224 and Ladder Co. 110 responded with hydraulic tools—just in case—but were able to free him without much effort.  He didn’t make his train, however, and instead found himself in the back of an ambulance, en route to Long Island College Hospital for observation.