The last week of August saw not only a break in temperature, but also a break in the car and motorcycle thefts that dominated the summer. There were, however, several robberies—including a bank robber, a gym locker and from a pizza deliveryman. 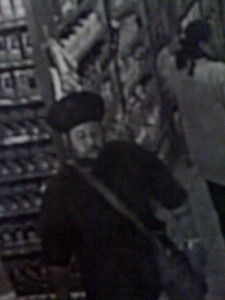 But, first, a reader has submitted a surveillance photo of a man she believes stole her iPhone from the Perelandra Natural Food Center on Remsen Street on Sunday, August 30. If you have any information about this person of interest, please contact BHB: webmaster (at) brooklynheightsblog (dot) com.

A woman had her purse stolen as she paid for her ticket at the United Artists Court Street movie theatre on August 29. The woman said she had removed her wallet to grab her debit card and placed her wallet back in her bag. She felt someone bump into her from behind several times while waiting for her ticket to print, and when she left she found that her wallet containing several credit cards and $100 cash was gone.

A bodega on Joralemon Street was robbed during the evening of August 26. When the owner returned the next morning, he found the front gate and a window were broken and money taken from the cash register.

A wallet was stolen from a locker at the YMCA on Atlantic Avenue on August 24. After swimming, the man returned to his locker and found the lock had been opened. The perp made $110 in charges before the man cancelled his card.

A handbag was stolen from an office employee who left it in an unlocked desk drawer while she got water on Court Street near Joralemon Street on August 25. Inside, there was $70 cash, an iPod and a cell phone.

A bank robber stole $597 from the Marathon Bank on the corner of Atlantic Avenue and Bond Street on August 27. The thief passed a note to a teller that said: “$4000. No dye packs. No Alarms. No one gets hurt.” The teller filled a bag with $597 and the robber took off.

A deliveryman was mugged for the pizza he was delivering on Wycoff Street between Court and Smith streets on August 27. The man was approached by a thug who struck him several times with a stick before making off with the pie.