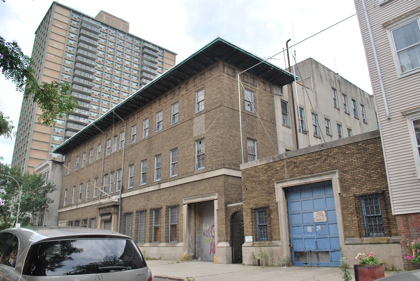 Owners behind the 72 Poplar Street conversion project have been sent back to the drawing board once again.

Last week, the Landmarks Preservation Commission “strongly recommended” that the owners behind a plan to convert the former precinct house into a rental building rethink their designs.

“The commissioners felt that the addition was too big and asked them to seriously restudy the proposal for the project,” explained Landmarks spokeswoman Lisi DeBourbon. “The application wasn’t expressly denied, and there was no vote, but they did strongly urge the applicant to go back to the drawing board.”

The owner, Regal Investments, had envisioned including a two-story addition to the building’s garage and main building, which would be comprised of a precast concrete hanging wall, according to a presentation before Community Board 2 in April. The garage will be converted into a four-story, 35’ one- or two-family home, explained architect Andrew Fredman, and the addition to the original building will not be visible from the street because of its sight lines. Ground floor space will be for medical offices, and the developer is completely restoring the original iron window gates, brickwork, and framing along the building’s façade. Renderings are here.

An owner of the building, Bill Punch, told BHB on Monday that he is still sorting out the project’s next steps.

Fredman told BHB today that he and his client are discussing how to respond to Landmarks’ comments.

Once the owners present Landmarks with a new plan, the Board will hold another public hearing on the proposal and vote, DeBourbon said.