Designs for 72 Poplar St., and other CB2 land use meeting recaps 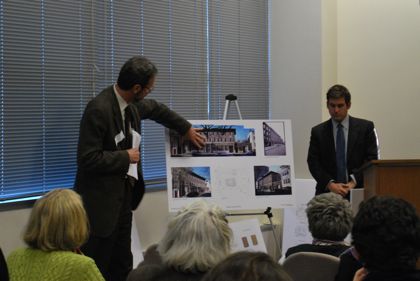 Lots of exciting votes came out of tonight’s Community Board 2 Land Use committee meeting. For starters, there are plans to reconfigure 72 Poplar St., the former 84th Precinct station house, into 24 luxury, market-rate rental apartments.

The developer — Regal Investments — has revised its 2007 plan and the building’s reconstruction now includes a 2-story addition to both the garage and main building, which will be comprised of a precast concrete hanging wall. The garage will be converted into a four-story, 35’ one- or two-family home, explained architect Andrew Fredman, and the addition to the original building will not be visible from the street because of its sight lines. Ground floor space will be for medical offices, and the developer is completely restoring the original iron window gates, brickwork, and framing along the building’s façade.

Brooklyn Heights Blog is getting the formal renderings on Thursday, and will post them soon.

“It will look like the original police station, and the only thing to tell it’s something new is the curtain wall on top of the garage,” said architect Adam Turba.

The land use committee voted 9-0 in favor of the project, with two abstentions. Brooklyn Heights Association Executive Director Judy Stanton abstained her vote, but said that the BHA is “certainly in favor of the [preservation aspects] — we think it’s been vacant way too long.”

Plans to convert the building to condos in 2007 fell through when designs were “no longer economically feasible,” developer Bill Punch had said at the time.

But things are different this time. “Now, we decided, in this market, to go rental,” he said after the meeting.

Arby’s
Also on the agenda was a presentation by Arby’s, the fast food chain that’s moving into the historic Gage and Tollner restaurant at 372 Fulton St. The committee voted 8-1, with two abstentions, in favor of the Arby’s plans. The architect, Larry Pinner, showed off designs that would not change any of the landmarked interior features of the space, and explained that all of Arby’s menus and tables and other restaurant-related elements would be free-standing, and not affect the historic wood paneling and mirrored walls. But like the former T.G.I.Friday’s that was there several years ago, the restaurant will display its flag on the exterior.

“You can still get the same dining experience, but with a new Arby’s look,” he said. “And, everything we’re doing is entirely reversible.”

BUG Building
The committee is also on board for landmarking 186 Remsen St., the former Brooklyn Union Gas building, and unanimously passed a motion to that effect. The committee did want to know how the building’s current owner, St. Francis College, plans to use the building and why it is applying for landmarking, but representatives were not present. We’ll update you once we find out ourselves.