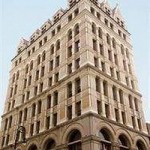 According to StreetEasy, a two bedroom, two bath unit on the sixth floor of the Franklin Trust Building, 166 Montague (corner of Clinton) has gone to contract for $1.29 million. By StreetEasy’s calculations, after making a down payment of $258,000, the buyer will pay an aggregate $8,701 monthly for mortgage, common charges, and taxes.

Thanks to ts for the tip.